Plant a tree in memory of Melvina
An environmentally-friendly option 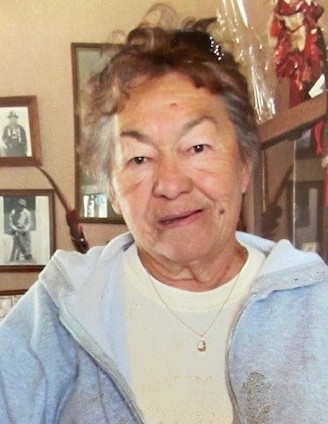 Melvina Marie Wagner was the daughter of Louise Flammond Goings and Clarence Wagner born on March 14th,1936 in Browning. Before she was “mom or gram”, she was “Bing”. We all knew her by her nickname “Bing”, a name her Grandpa Pete Flammond gave her as a little girl. But every so often gramps or one of her kids call her “Mel”. But for today as we remember her, let’s call her gram or Bing.

Bing had a huge smile and loved to have fun and that's exactly how she met her husband of 62 years, Hugo Johnson “Grandpa”. Having fun wearing big bell bottom jeans, huge sunglasses and a bright smile. Hugo walked into the Babb Bar and Lounge to find the most beautiful woman he'd ever seen. Bing wore pointy toed-boots, big saddle bag purses and she was stunning! From that point forward they were inseparable. They married in Cardston, Alberta.  Gram wore a bright red dress, Grandpa in signature cowboy boots and they were married. Mr. and Mrs. Hugo Johnson!

Gram was the true definition of a rodeo mom, way before being a “rodeo mom” was a thing. Gram was known to travel. She loved to go anywhere and do anything for her family. She would load up and take her kids across the US and Canada! If anyone said, “should we go?” before they could come up with a reason not to, gram would already be planning, packed and ready to hit the road! And when I say travel, that includes horseback! Her travels included backcountry packing. Grandpa would bring his wife into the Bob Marshall some 36 miles! Yes, she rode 36 miles into the backcountry!

She was a woman of great adventure and was known for her cooking. If riding all day doesn't make you tough, being able to cook for the camp AFTER sure does! Gram would cook and take care of her husband and whoever was tough enough to go back with them. She was known for her amazing bread, a recipe she has since passed on! She has also shared her love for cooking with her children and their families. Gram cooked at Johnson’s Cafe for many years. While gram was at work at the restaurant, her kids would ride bareback to the restaurant and show up at just the right time for a special burger wrapped and ready to go out the back door. Roxanne proudly shows off her skills she learned from gram from all their years cooking, baking and just spending time together.

Gram and gramps also spent a lot of time traveling for work. Grandpa did guided tours so they would attend sporting shows. At these shows Grandpa and Grandma set up a booth. One time Grandpa was away from the table and a man stopped by and wanted to know why they didn't take out bow hunters.  Without missing a beat Gram replied, “Well, when the Indians got rifles hey were smart enough to throw their bows into the bushes, so we don't take out bow hunters!”

When gram was home, she had such a beautiful magical place. She grew lilac bushes that would cover an entire side of her house, hummingbirds out the kitchen window, birds, squirrels, deer and the occasional bear would stop by the deck for a snack from the bird feeder. Her bright yellow house bloomed with flowers and trees every spring. She loved where they lived and was known to give horses a snack if they came by the front door. Ole 99 was lucky enough to get a snack and a bath from gram every time he came for a visit! She was so proud of their home and the love that they grew in it.

From their back deck you could see the backbone of the world, but to her grandkids they saw the best hill for rolling, a creek they weren't supposed to go down to, and an ice-cold Diet Pepsi after exploring outside all day! As they all grew up and had children of our own, they too would get a chance to experience all the adventures at grams house.

We’ll miss your smile, miss you at the rodeo, miss you in your favorite chair looking at the mountains, and we’ll all miss your kind voice and hearing you say, “oh I’m just checking on you, babe.”

Plant a tree in memory of Melvina by clicking here.
To send flowers to Melvina's family, please visit our floral store.

A service summary is not available

Plant a tree in memory of Melvina
An environmentally-friendly option

Plant a tree in memory of Melvina

1 tree planted in memory of Melvina

My brother Hugo adored his wife, Bing. My sincere condolences to our dearly beloved family.

A Memorial Tree was planted for Melvina Marie Johnson

Plant a tree in memory of Melvina